This is part 1 of a 3-part interview series with Liz McMillan, CEO of Dictionary.com. We sat down together at the Collision Conference in New Orleans to discuss the importance of language, meaning, and truth that words give to our human culture.

We’re living in strange times. Social media has given society new mediums in which to “weaponize” words, and we’re seeing this filter into every facet of contemporary life, especially politics – look no further than POTUS. Diplomacy by Twitter is commonplace, and delivering concise, impactful information in bite-size chunks has become a modern art form. But being concise doesn’t guarantee context. By reducing background information and shrinking word counts, are we doing a disservice to meaning in the quest for more re-tweets and favorites?

Especially when it’s meaning that matters.

Dictionary.com has been quietly, authoritatively fact-checking and calling out the current administration’s Twitter feed. Grammar and meaning are sticking points when trying to incite reaction, and “fact-checking” is increasingly sought after as a source of certainty and orientation to those who value truth.

We have reached the point where words, and their meaning, are our only truths. Click to Tweet

With this in mind, I spoke with Dictionary.com CEO Liz McMillan about language, words, and meaning in the new age of information warfare. What are the challenges for modern dictionaries when we are constantly creating new communication technologies, iterative language, and symbolic meaning in an increasingly global society?

Courtney: The curiosity behind “meaning” is so important. Do you feel that we’ve sort of lost that curiosity for meaning in America?

Courtney: And why do you think that?

Liz: I think that we are saturated with content. There are so many things that are going on in the world that we’re trying to decipher, and that we’re trying to understand. We can become very disenfranchised when there’s all these things happening around us, and become very isolated, because all of our communication is now coming through text, and we don’t have the human interaction that we all crave.

And because of the democratization of publishing, there is that underlying, “Well, what does that mean?” When I send you a text message, I’m publishing something. You might be the only audience member, but I’ve just put something in writing that’s permanent, that you’re going to consume.

It’s that permanence that causes us, as publishers, be very self-aware of, “Am I getting this right? Do I have the right nuance? How am I going to be perceived on the other end of this message?”

Courtney: There’s something about writing it down and declaring it publicly that makes it real. It’s a thing.

Liz: But the fact that we can legitimize something comes with great responsibility. We could extend that sense of responsibility to, “Okay, we have this vantage point. We see things that are happening in the world. We understand that words are being used in a way — by influencers, by people in power, by leaders – that impacts us, and we have a role to play in helping the world understand that.

The epitome of that for us is the “Word of the Year”.

Courtney: What was it last year?

I lost sleep thinking about choosing “complicit” as the “Word of the Year” last year. And it was such an obvious choice. 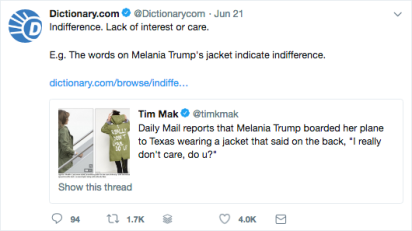 Courtney: How is the “Word of the Year” chosen?

Liz: We start with data. We say, “Okay, what words have trended, or spiked, or been in conversations this year?” We look at our look-ups of words that exist, we look at our misspells. We start there.

What we capture is the zeitgeist of what’s happening in the world.

The end of the year brings reflection, and our words are a perfect way to do that as we’re getting ready for the new year. It’s almost like a catharsis: “Oh, this year was complicit.” I had actually predicted in about June of last year that our word of the year be “unprecedented,” because it was an unprecedented year.

Courtney: Yes, it was.

And “unprecedented” was actually one of the front-runners. But, you know, we looked at all of these things, and this theme about complicit emerged. The reason I lost sleep over it was because it’s a little bit clinical…but at the end of the day, I got it. I didn’t want to politicize it, but what I wanted to say was, whether you’re active or inactive, you are complicit in the world you live in. So, I hope that came through.

Courtney: I am dying to ask, what do you think the word will be for this year?

Liz: I can’t predict what the word will be this year, but I’ve been thinking about what I hope it is. I think I would like for it to be “resist.” This is me as an individual person, not representing the dictionary. But, you see the word around us.

Courtney: Yeah. There’s a call to do that…it’s in reaction to what is happening. Or, I should say not in reaction to, in response to. I love the difference between reaction and response, because of the thoughtfulness of it. “I’m choosing to do this” is a response that requires thought.

I think that for Dictionary.com to understand and have that level of consciousness about the role and the gravity of being the provider of definitions and words is brilliant.

Truth is our Most Valuable Principle

The stakes are high and preserving the truth has never been more important. Encouraging curiosity is key. How can we hold those in power accountable if truth is relegated to an inconvenient afterthought?

If we hold our resolve, dig deep, and try to understand the true meaning behind words, we can mitigate the impact of weaponized language and use it as a point of orientation around heated situations.

Liz McMillan is the CEO of Dictionary.com. Its mission is to remove the anxiety we all feel with the English language, enabling and inspiring connection, communication, learning, creativity, and expression for more than 70M people each month.