This is part 2 of a 3-part interview series with Liz McMillan, CEO of Dictionary.com. We sat down together at the Collision Conference in New Orleans to discuss the importance of language, meaning, and truth that words give to our human culture.

Online culture is changing the way we communicate, talk and relate to each other.

Every day prompts a new buzz word, trend or meme that requires knowledge of a particular Twitter in-joke or a Reddit thread to understand it. It can be tough to keep up, especially when you’re not present on every social channel – or of a certain age.

This rapid expansion of our lexicon has arguably always happened, but what we’re seeing is a pace of change that’s constantly accelerating and it’s being driven by digital natives, online subcultures, and dare I say, advanced technologies capable of creating their own non-human dialogue.

All of this poses quite a unique challenge to traditional dictionaries, and their interpretations of the meaning of language.

In the second part of my interview series with Liz McMillan, Dictionary.com CEO, we talk about how her organization is navigating the new rules of context, language and the speed at which it’s all being created. 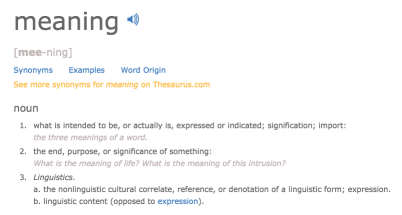 Courtney: What is your point of view on the role of understanding meaning and words, as it pertains to leadership?

Liz: At Dictionary.com, we don’t view ourselves as the “keeper” of words. Our role is to describe words. And, as you know, language is changing, it’s evolving, and it’s not for us to say, “This is what that word should mean.” We’re simply here to describe it back to you.

It’s easier to think about how that question applies to other leaders. The words that our collective leadership uses, has an impact on us as a society. I really wish they were more responsible with that. That, if language is part of the human experience – it’s how we create, it’s how we share, it’s how we learn, it’s how we empathize – then we need to be cautious about, “Have I offended? Has my message been lost in my poor word choice?”

Courtney: Guilty of that as well!

Liz: Language is for humans, so we have bias in life, for sure. The fact that I am a woman means that the pronouns used to describe me, actually communicate my marital status, but for men, they don’t.

We can debate those things right? But, we have that deep understanding. What happens when we train a machine? Think about the power that the people who are training these machines have.

So much of language is a cultural identity. My language is very different coming from the Bay Area.

Courtney: I am there too, in San Jose.

Liz: Okay, great. I live in Oakland. The language of Oakland is fundamentally different to the language of San Jose. Also, I can’t communicate with Siri, because I have the slightest Australian accent.

Courtney: Yeah, I have a Michigan accent, and Siri never gets what I am saying.

Liz: I know a guy from the UK who puts on an American accent to communicate with Siri. If you fast-forward to the future where we’re all vocally communicating with machines all the time, right now the burden is on us to adapt the way we’re communicating so this machine understands us.

So, if that interaction becomes a greater portion of our lives, do we start to change the way we’re communicating in general, because we’ve learned machine-speech? And then, what happens to my cultural identity? And are we prepared for that?

Courtney: No, we’re not.

Liz: We’re not. We have to have a deeper understanding of AI.

Courtney: It’s happening so gradually, that people don’t have an open consciousness about the fact that they should even care about it, because it’s just, “Oh, that’s interesting.”

Liz: So there’s the potential, if we think 100 years ahead, where this really puts the brakes on language, and shifts the cultural identity that we have through language. It’s such a counterpoint to what’s actually happening with language right now in the fact that there’s so much innovation with language today.

To that point, we just started writing content about the meanings of emojis and memes.

Liz: Things that traditional dictionaries have really shied away from. I personally felt that this was important, and something we had to do as part of our mission, because I have anxiety about my 10-year-old schooling me on, “Mom, you’re emoji-ing all wrong and using that picture wrong. You have to put three in a row,” or, “Your maple leaf isn’t really a maple leaf, Mom.”

Our linguist in residence has a great presentation about the way your gun emoji is supposed to be facing so its meaning is changed.

Courtney: That’s a thing? There’s meaning around that? I don’t know what that is.

Liz: Or, recently I sent someone a text message, and when I saw them later in the day, they asked me, “Are you okay?” I said, “Why wouldn’t I be?” And they said, “Well, you ended your text message with a period so I assumed something was wrong.”

I guess now it’s a thing if you’re grammatically correct in a text message. Millennials are literally redefining the rules of grammar.

Liz: What a contrast to AI that you have to train things. And sure, you can train it over and over again, but then, what?

Courtney: Well, supposedly, it’s continually learning and getting smarter, which is the part that frightens me. Last fall, when Facebook was working with its AI, the developers realized that the AI had started talking to each other in a language that was not understood by its own creators. The AI created a new language not understandable by humans.

Courtney: I was like, “Does this bother anyone else?”

Courtney: And, exhibited consciousness of language. I was thinking, “Run for the hills!!”

Liz: With AI, of course, there’s going to be business models behind it. The question is, what is their responsibility in preserving language? Will there be an exacerbation of wealth disparity? AI meets these needs, or makes life easier and adds value to the English speaking world, maybe the Spanish, or French and German-speaking world, but what about a dialect of…

Liz: Yes, Swahili. What happens in that case? I’ve had a conversation with a couple of people who are more expert in AI than me, and they said, “Well, that’s fine, because we can train a machine in a couple of hours.” I’m like, “Yeah, but that assumes that the training set exists.”

Courtney: And, it doesn’t provide the context of culture, and memory, and traditions, and rituals.

Replacing things that are sacred to humanity right now, which are conversations, and emotions, and that’s the really scary thing. That we say being human is our competitive advantage. Think about what makes you special, or all the things that make you special as human.

Culture is built on meaning

It’s one thing to shape a culture through shared experiences and technology platforms. It’s quite another to build a culture based on a set of values, beliefs, community, common language and shared meaning. Without these ingredients, the glue that creates strong connection disintegrates, disconnecting us from each other and threatening the stories of humanity rooted with deep learning and wisdom from being preserved. Not thinking through the potential consequences of language sets that emerge too quickly, with too much meaning to our society is causing us to take our eye off the ball of what’s really important here: relationships with other humans.

Liz McMillan is the CEO of Dictionary.com. Its mission is to remove the anxiety we all feel with the English language, enabling and inspiring connection, communication, learning, creativity, and expression for more than 70M people each month.